For those who love to chill out with friends for a mug or two, you will surely know where is SOHO FREE HOUSE at Penang Road (UPR) which is one of the hang out places in town for the night owls.

I have always thought that SOHO is a place for drinking and chit chat, never did it cross my mind that it serves good food. Thanks to Sam Ong who introduced this place to me.

Upon entering SOHO, you will see people hanging around talking and laughing with mostly a mug on their hands. There are even pool tables at the back of the pub for those that love to cue.

SOHO Free House doesn’t mean that the things here are FREE of charge. The actual meaning is it is a place to be free from the hustle and bustle of your daily life, to catch up with friends and enjoy a quick bite.

Where else, SOHO Penthouse is just on top of SOHO Free House. The SOHO Penthouse’s is a favorite chill out area among the urban crowd looking for a place to relax and away from the hectic weekend crowd.

For those that looking for a place that is not so crowded, SOHO Penthouse is an ideal choice for you.

The grand and beautiful chandelier hanging on the ceiling of the stairway to SOHO Penthouse.

One of the attractions here is the Kilkenny Draft Beer. Due to the high demand and also the crowd here, Kilkenny served at SOHO is very fresh and smooth.

For non-alcohol lovers, you can always go for their refreshing fresh fruit juice. 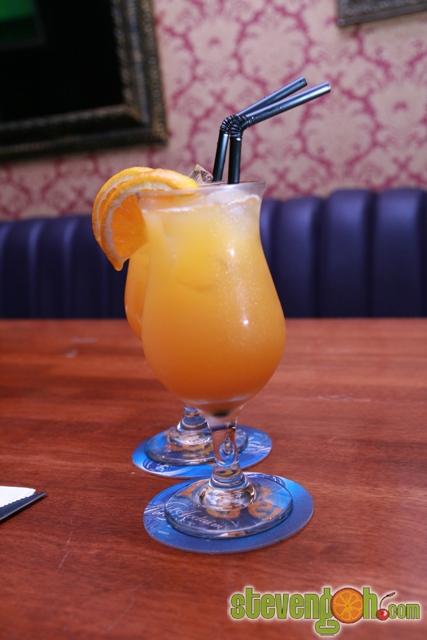 Traditional Shepherd’s Pie (Chicken) – RM7.80. The pie was cooked with chopped chicken or mutton that had been well marinated with home mixed ingredients included LP sauce. It was then covered with mashed potato and baked to perfection. The side dishes were green beans and slices of red cabbage and carrot.

The marinated chopped chicken/ mutton blend was very smooth and it blended very well with the mashed potato on top. This is one of my favorites. I have been returning for this dish for the 3rd time.

Homemade Burgers (Beef/ Chicken) – RM7.80. The patty of the burger was made of chopped meat which was well marinated with home made sauce which included LP sauce. The patty was than grilled and served with tomato, onion, cucumber and lettuce slices. The side dishes were fries, red cabbage and carrot.

If I would say Traditional Shepherd’s Pie is my first choice, this will be my second choice. In fact, I love both of these dishes. The meat was so juicy and flavorful. The combination of the meat and veggie was excellent.

Roast Herb Chicken – RM7.80. The roast chicken was well marinated with herbs. It was served together with homemade gravy, mashed potato and also slices of carrot and red cabbage.

If I had the option of pie and burger, I would prefer not to choose roast chicken. However, the aroma of the herbs was so nice and the taste of the gravy was not too salty and delicious. The meat of the chicken thigh was soft after marinated and roasted. Another nice dish which was simply irresistable.

Bangers ‘N’ Mash – RM7.80, also known as sausages and mash. It is a traditional English dish made of mashed potatoes and sausages and then covered with gravy. The side dish was green peas.

SOHO Speghetti (Chicken) – RM7.80, the spaghetti was covered with bolognese sauce and minced meat. It was finished with some chopped coriander. The cheese powder was served separately.

I am not a big fan of pasta, but the spaghetti was good.

For each of the set ordered, it will be served together with the tray of seasoning as below.

Overall, the food here is unexpectedly good. This place is mostly suitable for drinking and chill out. There are many parking area surrounding SOHO but the rate of the car parks are quite expensive during night time. This place is not suitable for children as the whole place is a smoking area. They should provide a non-smoking corner and some private rooms.